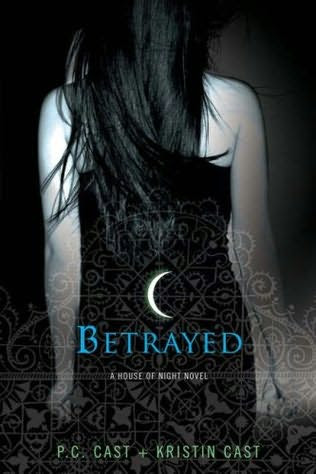 Summary - Fledgling vampire Zoey Redbird has managed to settle in at the House of Night finishing School. She finally feels like she belongs, even gets chosen as the leader of the Dark Daughters. Best of all, she sctually has a boyfriend... or two. Then the unthinkable happens. Human teenagers are being killed, and all the evidence points to the house of night while danger stalks the humans from Zoey's old life, she begins to realize that the very powers that make her unique might also threaten those she loves. Then when she needs her new friends the most, death strikes the House of Night, and Zoey must find the courage to face a betrayal that could break her heart, her soul, and jeopardize the very fabric of her world.

Review - This book was so much more than I ever expected. Well the series is turning out o be more. The Casts' put so much emotion into the story, it was incredible. I felt like I was feeling the same emotions that Zoey was feeling.
The first book was good but this one I just couldnt put down. I wanted to know what was gonna happen next. The characters in the story are all amazing and unique. I love that the Casts' didnt sugar-coat anything. The story fit the actual teenager well from the language to the attitude of the kids... just everything. I cannot put into words how I felt about this one other than it was one of the best stories that I have ever read.
Posted by Jordan Perryman at 4:38 PM No comments:

Summary - Enter the dark, magical world of the house of night, a world very much lik 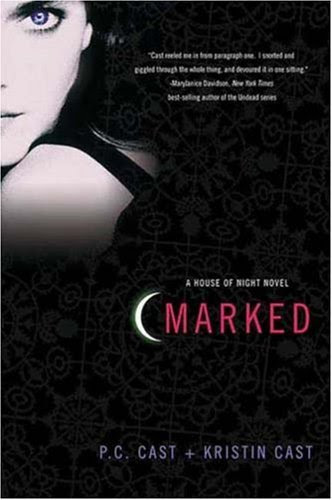 e our own except her vampyres have always existed. Sixteen-year-old Zoey Redbird has just been marked as a fledgling vampyre and joins the house of night, a school where hse will train to become an adult vampyre. That is, if she makes it through the Change - and not all of those who are Marked do. It sucks to begin a new life, especially away from her friends, and on top of that, Zoey is no average fledgling. She has been chosen as special by vampyre goddess Nyx. Zoey discovers she has amazing powers, but along with her powers come bloodlust and an unfortunate, ablility to imprint her human ex-boyfriend. To add to her stress, she is not the only fledgling at the house of night with special powers: when she discovers that the leader of the Dark Daughters, the schools most elite group, is misusing her goddess given gifts, Zoey must look deep within herself for the courage to embrace her destiney - with a little help from her new vampyre friends.

Review - AMAZING! The first and only word that came to mind when I finished this book was amazing. On the cover MaryJane Davidson wrote " The Casts reeled me in from paragraph one...." and I have to agree. I finished this book in two sittings, only cause I had to sleep, it was so good. The Casts' did an amazing job combining mystery, romance, humor, and the average teenage drama, plus a few vampyres.
When I first sat down I was not expecting it to be as amazing as it was but I would definitely have to put this book up ther with Twilight and the Blue Bloods series. Granted I havent read many vampire book, these have definitely been my favorites. I love how it wasnt about your typical cliche vampires, it had a more modern theme.When I finally fot to the last page I wanted to know more and what was gonna happen next. Luckily I had the rest of the series checked out.
All together this book was great. Everything about it was amazing and I would definitely recommend it to anyone who hast read it & I cant wait to see what happens to Zoey as she continues to change.
Posted by Jordan Perryman at 4:19 PM No comments:

The fortunes of Indigo Skye - Review

Its been awhile since Ive been able to get on and I have alot of Reviews to post so here goes. 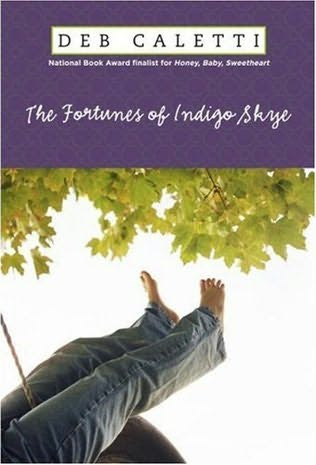 Summary - Eighteen-year-old Indigo Skye feels lke she has it all - a waitress job she loves, an adorable refrigerator -delivery- guy boyfriend, and a home life thats slightly crazy but rich with love. Until a mysterious man at the restaurant leaves her a 2.5 million dollar tip and her life as she knows is transformed.
At first its amazing : a hot new car, an enormous flat-screen t.v., and presents for everyone she cares about. Indigo laughs off the warning that money changes poeple, because she knows it wont happen to her. Until the day she looks around and realizes everything important is slipping away and no amount of money can buy it all back.....

Review - The fortunes of Indigo Skye ..... Im not sure of how to write this one. The meaning behind the story was good and the book was written well but I had a hard time reading it. I would read it a couple pages, put it down and wasnt too anxious to pick it back up. I didnt feel there was enough "action" persay for my taste. Im a more fantasy, thriller, keep you wanting more kind of person and Indigo's fortunes just didnt do that. Dont get me wrong, the moral of the story was good, it just wasnt something I would read again. Overall the book was good just didnt make me wanting more when I put it down.
I do plan to read more from Deb Caletti though.
Posted by Jordan Perryman at 4:03 PM No comments:

In my mailbox June 7

I am doing this early because I am at the library and just got some amazing books. I cant post a summary about them or a picture at the moment cause I dont really have the time so I am just going to post the names of the books. Ok first i got.
Wicked Lovely by Melissa Marr
The Luxe by Anna Godbersen
The Summoning by Kelley Armstrong
and then I got the two next books in a series that i have been reading and they are Diary of a Teenage girl Caitlin NO. 2 and 3.
Also my sister and me went to WalMart yesterday and we were looking at books and she asked me to recommend one to her and I showed her a bunch and she ended up with Generation Dead by Daniel Waters. She told me that I could read it first and I am so excited. But I think it might be awhile with the pile that I have out from the library so it might be awhile before I get around to reading that one. Ok so I was going to post pics and summaries but was having a hard time doing it so just let me know what you think of the books that I got this week.
Posted by Jordan Perryman at 1:32 PM 1 comment:

GRAB your current read OR the closest book to youLET the book fall open to a random page.
SHARE with us two (2) “teaser” sentences from that page, somewhere between lines 7 and 12.
YOU also need to share the title of the book that you’re getting your “teaser” from … that way people can have some great book recommendations if they like the teaser you’ve given!
PLEASE avoid spoilers!

This weeks teaser comes from the next book in my reading pile.... Mixed Bags by Melody Carlson 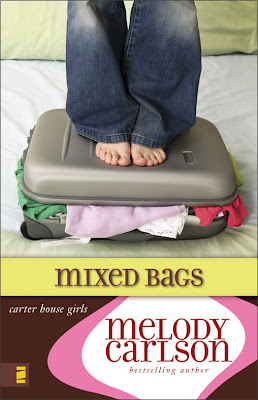 When her mom died, DJ had to move in with her grandmother, internationally famous ’60s fashion model Katherine Carter. Now Mrs. Carter’s opened a boarding home for young ladies, and DJ—who would rather wear her basketball team uniform than haute couture—is just sure they’ll all be unbearable fashion snobs. One by one, the girls arrive and begin to figure out how to fit into this new family, getting to know each other and forming friendships. Sure, there’s an aspiring diva or two, but before long, the Carter House girls are dating, fighting, laughing, shopping, sharing clothes, purses, shoes … and their deepest secrets. DJ may not turn into the perfect little lady her grandmother has in mind, but one thing’s for certain—with all these new “sisters,” her life will never be the same!

"And was it a compromise of her values? What about what she'd told Conner last night? What about his concern over high maintenance girls?"
Posted by Jordan Perryman at 8:47 PM No comments:

Yay so today is my 18th birthday and Im so excited! But anyways on another note..... tomorrow I will be gone for about 2 to 3 weeks so I will not be able to update as much. Im going to my moms and Im taking my computer but unfortunately she doesnt have internet so Ill have to go to the library. I will still try to update at least once a week. I just wanted to let everyone know. I will be posting a lot of reviews either when I get back or try my hardest to get them up during the weeks. I guess thats all there is to say I will get my Tuesday teaser up tonight and WoW post up tomorrow morning cause im not leaving until late tomorrow.

There are so many good contest going on right now and I dont know what all of them are at the moment so I will update as I remember them but one I just did was a contest for Pretty Dead so go here and check it out.


Here is another for I heart you you haunt me and another book so go check it out!

Here is another where you can win twenty boy summer and also the clique summer collection.
Posted by Jordan Perryman at 3:04 PM No comments: