Review- The Ghost and the Goth by Stacey Kade

(From the Book Jacket)  Alona Dare–Senior in high school, co-captain of the cheerleading squad, Homecoming Queen three years in a row, voted most likely to marry a movie star…and newly dead.

I’m the girl you hated in high school. Is it my fault I was born with it all-good looks, silky blond hair, a hot bod, and a keen sense of what everyone else should not be wearing? But my life isn’t perfect, especially since I died. Run over by a bus of band geeks—is there anything more humiliating? As it turns out, yes—watching your boyfriend and friends move on with life, only days after your funeral. And you wouldn’t believe what they’re saying about me now that they think I can’t hear them. To top it off, I’m starting to disappear, flickering in and out of existence. I don’t know where I go when I’m gone, but it’s not good. Where is that freaking white light already?

Will Killian–Senior in high school, outcast, dubbed “Will Kill” by the popular crowd for the unearthly aura around him, voted most likely to rob a bank…and a ghost-talker.

I can see, hear, and touch the dead. Unfortunately, they can also see, hear and touch me. Yeah, because surviving high school isn’t hard enough already. I’ve done my best to hide my “gift.” After all, my dad, who shared my ability, killed himself because of it when I was fifteen. But lately, pretending to be normal has gotten a lot harder. A new ghost—an anonymous, seething cloud of negative energy with the capacity to throw me around—is pursuing me with a vengeance. My mom, who knows nothing about what I can do, is worrying about the increase in odd incidents, my shrink is tossing around terms like “temporary confinement for psychiatric evaluation,” and my principal, who thinks I’m a disruption and a faker, is searching for every way possible to get rid of me. How many weeks until graduation?

What words can I use to desribe this novel...? Cute, funny, but my favorite word would be.... unoutdownable. Is that even a word?!?! Well I just made it one if not. The only time I wasn't reading this book, was when I was sleeping, working, or cooking. I wouldn't say it was suspensful but it kept my interests. It had its serious moments and then there were the others where I was laughing out loud!

At first I would have thought of this one as just super-natural but it is so much more. It has its supernatural aspects as well as a  little chick-lit (to me), comedy and romance. I loved all the characters. They were all unique and if not likeable, loveable! So mant characters changed in this novel and it was great!

I loved everything about this novel and I would recommend running out and getting a copy right now!

Ending - 5 stars
Posted by Jordan Perryman at 4:26 PM No comments: 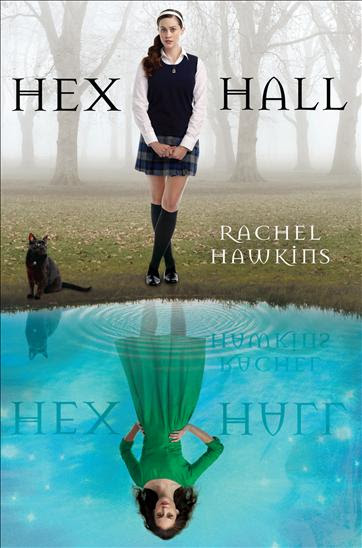 (From Amazon) Three years ago, Sophie Mercer discovered that she was a witch. It's gotten her into a few scrapes. Her non-gifted mother has been as supportive as possible, consulting Sophie's estranged father--an elusive European warlock--only when necessary. But when Sophie attracts too much human attention for a prom-night spell gone horribly wrong, it's her dad who decides her punishment: exile to Hex Hall, an isolated reform school for wayward Prodigium, a.k.a. witches, faeries, and shapeshifters.
By the end of her first day among fellow freak-teens, Sophie has quite a scorecard: three powerful enemies who look like supermodels, a futile crush on a gorgeous warlock, a creepy tagalong ghost, and a new roommate who happens to be the most hated person and only vampire on campus. Worse, Sophie soon learns that a mysterious predator has been attacking students, and her only friend is the number-one suspect. As a series of blood-curdling mysteries starts to converge, Sophie prepares for the biggest threat of all: an ancient secret society determined to destroy all Prodigium, especially her.

When I first read the description for this book I couldn't wait to get my hands on it. Then after I bought it, I read about half and had to put it down so that I could read something else. Finally, I picked it back up and was unable to put it down. I kept finding myself wanting to  know what was gonna happen next but I felt it didnt hit its climax til the very end and the dropped. Which I am not saying is a bad thing. If I hadn't know there was going to be another, though, I probably would have been more disappointed, but knowing about the next, I am VERY excited.

I really loved everything about this novel. There were many unique characters and many did things that you never would have expected. That was one aspect of Rachel's writing that I really enjoyed. She could make you really dislike a character all through out the book and them make them do something so shocking that you never would have seen coming.Which for me made me see the character in a whole new light.

Although I thouroughly enjoyed this novel there were somethings that did bother me. There were a few times that Rachel would touch on a subject, that I felt was important to the story and then never went further with it. Which later made me think a lot about it once I had finished the novel.

Overall I really enjoyed Hex Hall. I loved that it included many fantasy creatures and had an original storyline. I would recommend it to anyone who enjoys paranormal novels, but with a hint of romance.