Marked as special at an early age, Jacinda knows her every move is watched. But she longs for freedom to make her own choices. When she breaks the most sacred tenet among her kind, she nearly pays with her life. Until a beautiful stranger saves her. A stranger who was sent to hunt those like her. For Jacinda is a draki—a descendant of dragons whose greatest defense is her secret ability to shift into human form.

Forced to flee into the mortal world with her family, Jacinda struggles to adapt to her new surroundings. The only bright light is Will. Gorgeous, elusive Will who stirs her inner draki to life. Although she is irresistibly drawn to him, Jacinda knows Will's dark secret: He and his family are hunters. She should avoid him at all costs. But her inner draki is slowly slipping away—if it dies she will be left as a human forever. She'll do anything to prevent that. Even if it means getting closer to her most dangerous enemy.


Mythical powers and breathtaking romance ignite in this story of a girl who defies all expectations and whose love crosses an ancient divide.

I loved everything about this novel. From the cover, to the characters, to the romance. I loved how action packed it was but had its super romantic moments. I had a very hard time putting this one down and when I was at work I would tell everyone around about it and how I needed to know what was gonna happen next.

I love the characters and all the relationships between the characters. When I started reading Firelight I had no idea it would take the turn that it did.

When Will walked into the school and Jacinda could sense him, my mouth dropped and I gasped. The book did that to me many, many times. If I could use two words to describe this novel they would be gripping and jaw-dropping.

Thats also how the ending left me. I had to know what was gonna happen next and I was sad that I had to put it down.

I would recommend it to many people, and in fact have. The people that I work with and have told, now want to read it so head on out and get yourself a copy because this one is a MUST - READ!!!!

Email ThisBlogThis!Share to TwitterShare to FacebookShare to Pinterest
Labels: None 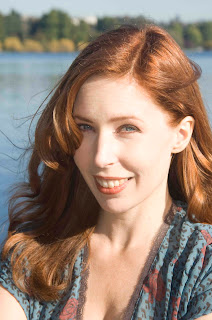 
Caitlyn Monahan knows she belongs somewhere else. It’s what her dead mother’s note suggested, and it’s what her recurring nightmares allude to. Desperate to flee these terrifying dreams—and her small town—she accepts a spot at a boarding school in France. Only, when she arrives, her nightmares get worse.

People often ask me if I get any say about the cover art for my books. Sure I do! But does anything I say end up on the cover? Rarely, which may be for the best. Here’s the story of the cover to Wake Unto Me.

My editor asked me, “Can you tell me any sort of ‘icons’ that will be in the book? If you can let me know of a few themes/images that you think of when writing the book, we can work with those to come up with a design.”

In response, I said and sent this: 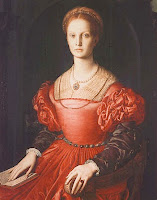 “This is the portrait that was my inspiration for the de’ Medici woman burned as a witch, whose portrait hangs in the office of the headmistress:
Portrait of Lucrezia Panciatichi, by Bronzino. Uffizi Gallery, Florence, Italy (Right) 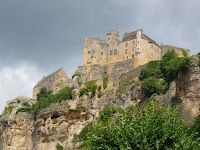 The castle in which the school is housed will play a major role in the story:


“The heroine has long, straight black hair and pale skin. Themes I think of are sisterhood, ancient feminine powers, alienation, longing. Longing to escape one’s origins, longing for love, longing for a sense of one’s own identity. A lot of the heroine’s experiences take place at night, so darkness, mist, and moonlight are good.”

And I also sent this because I thought it was spooky:
Detail of “Lady MacBeth” by Henry Fuseli (Right)

And this because I love Art Nouveau:
“Evening Star” by Alphonse Mucha( Left)

Many months later, my editor sent me the concept art that they’d come up with:

Of course, it looks nothing like any images I sent them, except maybe the smoky/ghosty bit is reminiscent of the Fuseli painting. It does capture ‘longing, mist, darkness,’ though.

The heroine’s hair is the wrong color, but oh well; you wouldn’t have been able to see black hair on a black background. Despite that, I loved the concept. My editor promised me that it would be ‘finessed’ – which I took to mean they’d fix it so the heroine didn’t look like she was wearing a big nasty wig.

The next version of the cover I saw was supposed to be the final version, the version that would appear in stores. I had two issues with it, the first of which had to do with her hands:

Can you see the problem?
Her hands are on the wrong arms!!!!

My other problem was that the heroine is obviously naked. Given that this is a YA novel, it seemed a wee bit too sexy.

They reattached the hands to the correct arms, and put a tiny little black tank top on the heroine, and here’s the final version:

And that’s the story – from the author’s point of view, at least! – of how the cover to Wake Unto Me was created.
___________________________________________________
Lisa's Bio: Lisa Cach is the award-winning author of more than twenty romantic novels and novellas, ranging across sub-genres from Paranormal, Historical, Contemporary, and Chick Lit, to Young Adult. Her novel “Dating Without Novocaine” was named one of Waldenbooks’ “Best Books of 2002,” and she is a two-time finalist for the prestigious RITA Award from the Romance Writers of America.

Lisa Cach was born and raised in the Pacific Northwest, where she still lives today. Her professional background includes teaching conversational English in Japan, and several years working the graveyard shift on a mental health crisis line. She has traveled to the foothills of the Himalaya, the jungles of Borneo, the Carpathian Mountains of Romania, and the painted caves of the Perigord Noir, in France. She has sailed the Caribbean as a working crew member of a research schooner, and the Bering Sea as a guest on a small ship.
Posted by Jordan Perryman at 6:25 PM No comments: